What I Learned From Bali

To fulfill one of my liberal arts electives in college, I chose to take Cultural Anthropology. Over the next ten weeks I’d learn about various cultures, spending a significant amount of time studying Balinese culture. I thought the material would be trivial. I asked myself: “What does this have to do with software engineering?” Years later I’d find the answer to this question. 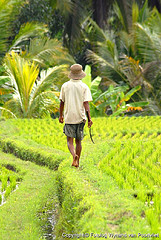 At the center of Bali sits the Batur volcano. Rains that fall upon the island carry nutrients from the volcanic soil down to the ocean through a series of rivers and streams. For centuries, groups of rice farms, called subaks, have been managing the flow of water from the volcano for their crops using dams and irrigation systems.

The Hindu religion of Bali plays a central role in this process. The Balinese people believe the water from the volcano to be a gift from the water goddess, Dewi Dano, who lives in the crater lake at the top of the volcano. Each subak is formed around a water temple dedicated to the goddess.

At the start of each harvesting season, priests from the local subak temples travel to the top of the mountain, offer gifts to the goddess, and, in exchange, receive holy water for the rice fields. The priests return to their subaks for celebration and distribution of the holy water. During this time of celebration, the local subak heads meet and discuss when water will be sent to downstream subaks and when the new crops will be planted.

Synchronizing the flow of water to downstream subaks is important. Rice attracts pests such as insects and rats who can quickly damage a farmer’s crop. In order for all farmers to have a successful harvest, they must time the planting of rice perfectly. By harvesting at the same time and then fallowing the land, they can control pests by depriving them of food and a habitat.

For centuries, Bali has has managed rice production using this self organized democratic system.

In the mid 1900s, population increases in Indonesia meant the region could no longer feed its own people. Luckily, advances in genetically modified rice promised increased crop yields. In 1971, the Indonesia government embraced this new “Green Movement” and promoted the use of genetically modified seeds, pesticides, fertilizer, and machinery. Farms were told to plant “as often as possible”. There was no longer a need for the religious water temples. Science had proved more efficient.

Or so they thought.

The “Green Movement” carried with it many unintended consequences. Planting as often as possible disrupted the synchronization of the subaks, and pests quickly returned to the fields. Harvest yields began to decrease, so stronger seeds and pesticides were created and used to combat the pests. Over time, the increased use of pesticides brought damage to the soil and irrigation systems and pushed Balinese rice production into chaos.

At the time, the Indonesian government couldn’t understand how applying a new, seemingly better technology hurt them. It wasn’t until an anthropologist, Stephen Lansing, began to study Balinese culture that the intricacies of the traditional system were discovered. Lansing’s studies and findings eventually convinced the Indonesian government of the problem. Today, many of the rice farms in Bali have returned to the traditional method.

Lansing’s studies were objective, as most anthropological studies are, understanding all elements of the system (geography, religion, festivals, politics, and harvesting) and the relationships between them. This holistic approach isn’t only for anthropologists, anyone managing change or solving problems in a complex system must understand the meaning of all components. In a recent post on Good Experience, Mark Hurst writes

If you’re interested, “holistic” and “holy” come from the same root. The idea offered by the word is bigger than any one discipline or tradition.

This shift to the holistic affects us – you, reading this – starting right now – even down to the day-to-day reality of our jobs.

Would you want a doctor to prescribe you a medicine without first examining your medical history, existing conditions, and current prescriptions? An engineer designing the braking system of your car not considering the horsepower of its engine? Your financial advisor not understanding the complexities of the investments he/she is making for you?

Quick-fixes almost always present much larger problems in the future. It’s better to understand the problem as a whole and then approach solution design.

It turns out that what is seemingly trivial can play a significant role in your future.

(For more information about the Stephen Lansing’s work in Bali, view his Long Now presentation on FORA.tv.)